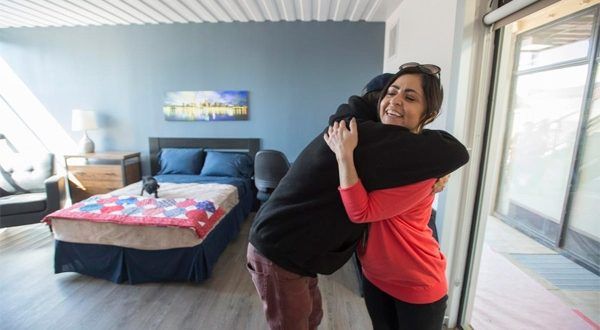 Five veterans settled in Thursday, joining four other men who began moving in March 3 to the two-story, 16-unit complex.

“It’s a perfect studio apartment,” said Marine Corps veteran Emil Kurt Carson, 54, who spent the past six of 11 homeless years living beneath a bridge in Anaheim, and before that lived in motels, the backseat of his car and behind a dumpster in a business park.

“It’s not like being at that roach motel down there on the corner of Beach.”

Each fully furnished 480-square-foot unit got a newly delivered addition that arrived in the afternoon: desktop computers, along with a desk and task chair, donated by the group Heroes Deserve Help.

Potter’s Lane is a project of the Midway City-based nonprofit American Family Housing, which has received donations and volunteer help from around the county.