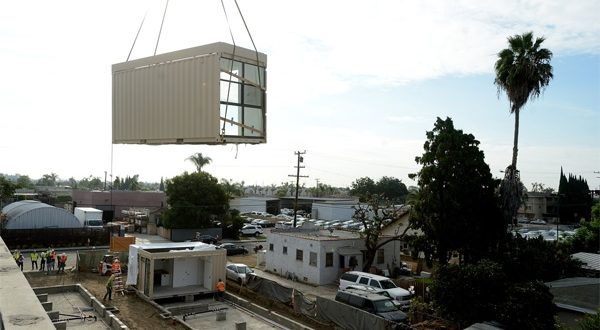 Last fall, right around the time Dean Harrell rolled a sleeping bag on the hard ground of the newly opened Courtyard homeless shelter in Santa Ana, a crane was dropping shipping containers into place on a dirt lot in Midway City.

There’s no way Harrell could have known it then, but he was destined to live in those steel boxes.

If you had told him that at the time he wouldn’t have believed it.

And he still didn’t, right until the morning last month, when he actually moved in to his own studio apartment created from three containers. By then, that dirt lot in Midway City had been transformed into a landscaped village for formerly homeless military veterans like Harrell.

Nobody can say, yet, how Harrell might be transformed.

Potter’s Lane, the name of the 16-unit micro housing project on Jackson Street, bore no resemblance to what Harrell imagined a few months ago, when he first heard about the idea from people at the Veterans Affairs Community Resource and Referral Center in Santa Ana.

Then, the words “iron coffin” popped into his mind.

He later saw that Potter’s Lane is far from that.

HOW THEY WERE MADE

When 64-year-old Harrell moved in a little over two weeks ago, the containers had been reborn as bright and comfortable living quarters – insulated, air-conditioned and fully furnished, and with floor-to-ceiling windows to let in the sunshine.

Constructed and managed by the nonprofit American Family Housing, whose headquarters is right next door, Potter’s Lane has attracted wide attention as an innovative approach to a stubborn problem: quick and affordable housing for people who are chronically homeless.

It’s the first permanent housing complex for the homeless in California created from modified shipping containers, and possibly the only one nationwide.

In the eyes of many, Potter’s Lane has come to symbolize the power of transformation.

The company that turns the containers into building blocks for homes, GrowthPoint Structures, typically uses its factory near Dodger Stadium to modify one-use shipping containers into custom homes and schools. Potter’s Lane is the firm’s first foray into multi-unit housing.

“Our goal is to do this everywhere on a bigger scale,” said Lisa Sharpe, GrowthPoint’s senior vice president.

Proponents of using containers to build affordable housing expect costs to come down as more companies like GrowthPoint compete in that market. The price tag for Potter’s Lane has yet to be revealed. The original estimate in December 2015 was $1.9 million. American Family Housing has declined to release a final figure until it finishes an analysis, and would not confirm a $6.3 million figure cited by one news outlet.

“There were a lot of lessons learned,” said Steve Harding, communications director for American Family Housing, noting that Potter’s Lane is a first-of-its kind. “I guess you could say we kind of over-designed it.”

But those who champion shipping container housing note that the building process is much cheaper and faster – about half the time – than traditional home or apartment construction.

Last summer, the 54 Potter’s Lane containers spent about a day each being processed at GrowthPoint’s factory, each emerging shrink-wrapped and ready for delivery.

On four dates in September and October, they arrived at their final destination in Midway City, in a neighborhood that includes both light industrial businesses and older stucco homes. A 180-ton crane topped with a fluttering American flag lowered each box onto a foundation where construction workers then welded them in place.

In early March, the first veterans moved in.

It remains to be seen if the residents will be transformed so dramatically. Early signs indicate that having a safe, calm place to sleep works wonders.

Emil “Kurt” Carson said that during his first night in his second-story unit, March 3, he slept nine hours straight.

That compares with the two-hour catnaps he’d take during the six years he spent living under a bridge that crosses the Santa Ana River in Anaheim. The 54-year-old Marine Corps veteran of Desert Storm and missions in Somalia and Eritrea, who was homeless for 11 years, said he didn’t sleep much under the bridge because he was wary of thieves.

Now, in Potter’s Lane and its 480-square-foot studio apartments, Carson is more trusting. “I’m not uncomfortable with these guys, like I was with those people under the bridge.”

Harrell, too, had grown wary for similar reasons: He lost three cellphones in three months while sleeping at the Courtyard shelter.

A few weeks ago, while still at the Santa Ana shelter, he packed in haste for his move to Potter’s Lane, stuffing cookies and other snacks into a suitcase.

“Are you leaving now?” a woman asked him that day. “Well, God bless you. I’m trying to find a way out of here. I’m glad for you.”

A bit later, after he wheeled his belongings and his walker a few blocks over to the veterans center, he said he was tired of living at the shelter, a former bus terminal.

“I gotta get the hell out of here.”

He was talking as much about how he lived as where.

Income is part of the problem. About half the veterans have housing vouchers issued by the VA, and rents are subsidized on a sliding scale, depending on income. The Orange County Housing Authority paid for security deposits.

But all of the veterans at Potter’s Lane have led post-military lives fraught with other trouble – some of their own making and some they never asked for. At Potter’s Lane, case managers from the Veterans Administration and the Illumination Foundation, another Orange County nonprofit that works with the homeless, are around to help the men remain stable with whatever assistance they might need.

Still, limited housing options add to their dilemma, and solving that is a huge step forward.

On move-in day for Harrell, Jean Willis, services coordinator at the veterans center that guided Harrell to his new home, called out to the man she’d helped.

“Dean,” she said, “I can’t believe the day has finally arrived.”

After spending most of the past three years scraping up money for motel rooms and, more recently, sleeping amid the miseries of nearly 400 people at The Courtyard, he was eager for better surroundings.

“To get stable,” Harrell said, “you need your own residence.”

Potter’s Lane is small and lean, but not without niceties.

There’s an open courtyard where neighbors can mingle if they choose. There’s a community room stocked with donated food; a coin-operated laundry.

There’s a stainless steel barbecue and wooden planters to grow vegetables. Lettuce already sprouts in a hydroponic garden fertilized by fish one of the vets feeds regularly.

Hundreds of thousands of dollars in cash and in-kind donations, along with dozens of volunteers – including other veterans – helped make Potter’s Lane possible.

Kristi Russell, a three-year resident of the Midway City neighborhood, watched the last of the containers arriving in October from her front yard a couple of houses down, on Jackson Street.

“I don’t know why they don’t do (this) in more places,” Russell said of the idea of housing the homeless. “It’s really ridiculous that they don’t.”

Orange County has about 450 homeless veterans, based on a survey done in 2015. Over the past year, a few other projects have launched to house them.

Harrell sees Potter’s Lane as a beginning, not an end.

Even at his age, Harrell hopes to regain some of the pride and independence he once had when he owned a home and worked with his hands.

Lean and lanky, he’s a gruff man with a voice like a crunch of gravel. He claims affiliation with a motorcycle gang and tough Sicilian heritage by way of saying “Don’t mess with me.”

His bushy mustache, with the tell-tale yellow stain of a smoker, is a darker gray than the hair that flairs out from under an assortment of baseball caps he wears to cover his otherwise bald scalp. T-shirts, jeans and sweatshirts make up his wardrobe.

He calls himself “another bitter veteran” of the war in Vietnam, where he says he served in 1970 and ‘71. He still sometimes uses an offensive, four-letter word to describe the Vietnamese people he fought in the war – well aware that his new neighborhood is within jogging distance of the biggest Vietnamese enclave outside that country.

But his greatest tragedy, he says, didn’t involve the war at all. It happened in this country, in 1998, when he says a drunk driver killed his wife and two children.

Other misfortunes add to his attitude: A work accident that damaged his back; the death of a younger brother in a house fire; a 2014 assault by two men wielding a bat in which he lost some teeth and many personal possessions, including his family photos.

Harrell said he made a living swinging a hammer, and that he once ran his own roofing company. These days he looks for the odd construction job and, if needed, he’ll panhandle.

The last three years have been particularly rough, Harrell confesses.

“It’s been harder and harder to find the motivation to keep going.”

Ramon Irving, a mountain of a man who helped Harrell move his belongings to Potter’s Lane, works as a peer specialist with the VA. He knew Harrell from 20 years ago. Back then, he worked under Harrell as a laborer on a construction project. More recently, he’s been helping his old boss find a new start.

“Dean gets sober, then unsober, then sober,” Irving said. “He disappears, and then I’ve got to go find him.”

Harrell’s had his struggles, but over the past year or so, he’s been better.

Harrell will resort to panhandling if needed, as he did in the weeks leading up to his move to Potter’s Lane.

One day in February, with an appointment to meet his VA case manager looming about an hour away, Harrell plucked a folded cardboard sign from among belongings he stored at the Santa Ana veterans center.

He hung the sign from his neck and let it unfurl: “Disabled Homeless Vietnam Veteran. Please Help.”

After 30 minutes at his favorite spot, on a median at Fourth Street at the Santa Ana/Tustin border, he left with $7, a ham sandwich and a bag of almonds.

He gave away the nuts, pointing at his missing teeth: “Can’t eat them.”

When moving day arrived on March 16, Harrell was short on cash to pay his first month’s rent, $297. After a mad scramble, an American Legion post in Newport Beach came through with a check for $210.

In the future, a monthly $790 disability check will more than cover his rent, which includes utilities and internet.

On moving day, Harrell’s friend Irving and another VA peer specialist, Nate Berkley, made several trips to unload his suitcases and boxes. They were filled with clothes, bedding, books and junk food.

“Oh, my God, man, this is nice,” said Irving, a veteran who also spent about a year homeless. “You know, in an earthquake, this isn’t going to fall apart.”

Harrell seemed ready to settle in. He listened as he heard the house rules (guests are limited to a few overnight stays at a time), and expressed excitement when he signed his lease.

“It’s going to take wild horses to get me out of here now.”

At his doorstep, he thanked Irving and Berkley, offering each a brotherly hug.

Then, as they left, he danced a jig.