For Kenneth Salazar, the past came back as a series of scenes in a fractured chronology. Life after the Army had been one of dead-end jobs and episodes of sleeping in cars, each coming to an end when the vehicle was impounded.

“I woke up in a motor vehicle in other people’s driveway wondering, ‘What in the hell am I doing here?’ ” Salazar said.

Most recently, he was sleeping in a park when an outreach worker got him to go to the Courtyard, a shelter that opened last year in the former Santa Ana bus terminal. There he slept on a mat.

That turned out to be a steppingstone out of his past. For the first time since his discharge, Salazar, 60, now has a permanent home that cannot be impounded.

Salazar was one of 15 homeless men — almost all veterans — selected to move into Potter’s Lane, a pioneering housing project built from recycled shipping containers. Salazar will pay $69 a month for his single unit. The balance of the $1,259 monthly rent will be subsidized. 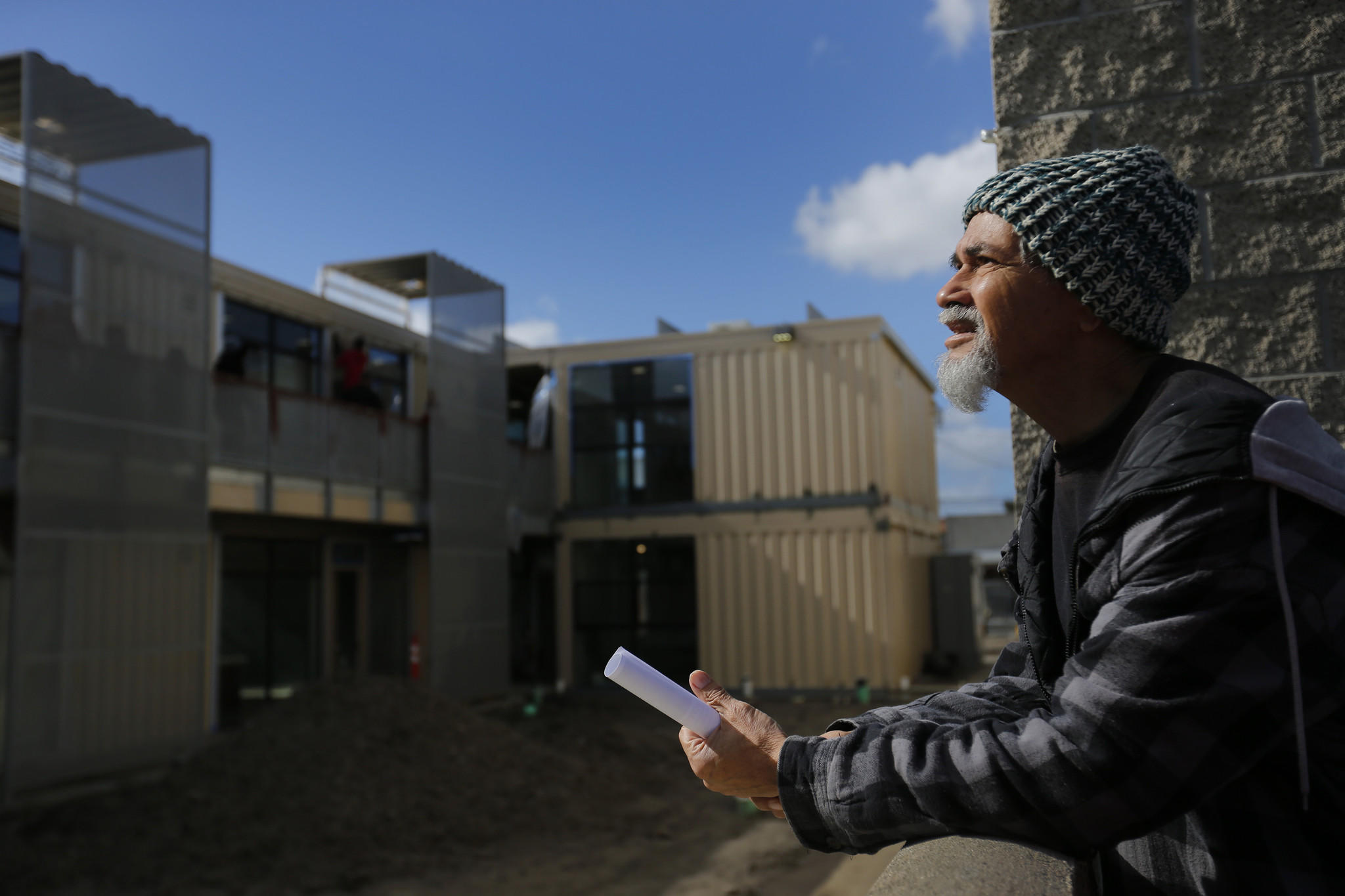 Potter’s Lane is an example of permanent supportive housing — subsidized apartments with services to provide the support that the chronically homeless need to adjust to life under a roof. It was funded with a combination of low-interest government and private loans and will be supported by subsidies from state and federal programs for veterans and the chronically homeless.

In Los Angeles, voters have approved $1.2 billion in borrowing to help build 10,000 such units. Following the example at Potter’s Lane, some of those projects are now being designed with shipping containers as the structural element.

The new residents of Potter’s Lane were screened by the Department of Veterans Affairs and the Illumination Foundation, an Orange County homeless services agency. All 15 met the requirement of being chronically homeless, meaning they have long-term experience on the streets complicated by a mental or physical disability or addiction.

Eight of the new residents are veterans who were honorably discharged. Their rent is being subsidized by veterans’ vouchers from the Department of Housing and Urban Development. Two are funded by a CalVet program to assist vets who would have a hard time finding homes because of less-than-honorable discharges. 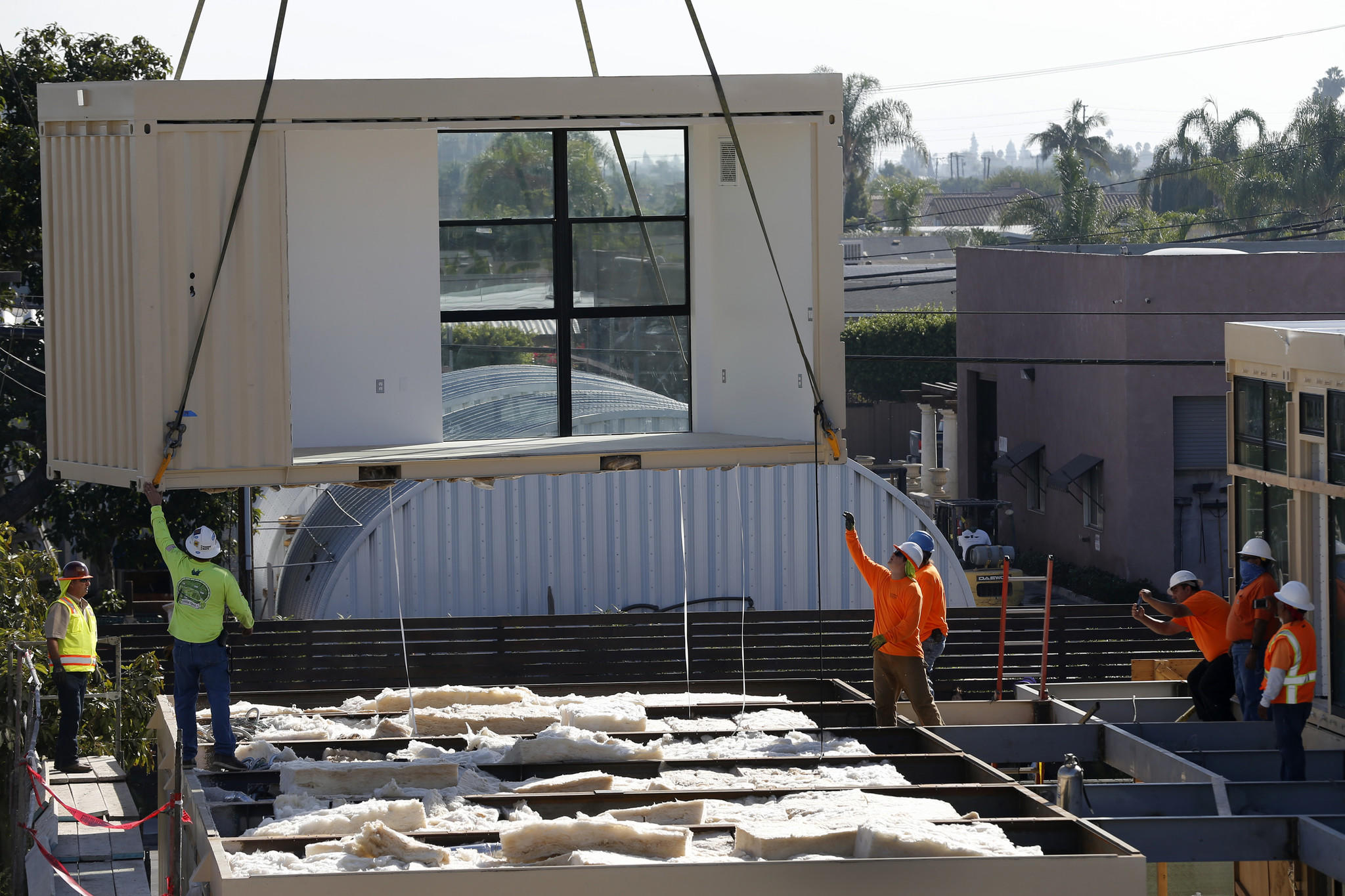 Others are assisted by federal subsidies that do not require veteran status. But because preference was given to veterans, most of them are veterans, said Steve Harding, director of external relations for American Family Housing, the Orange County homeless services agency that built Potter’s Lane.

“As long as they qualify, they stay here,” Harding said.

Some are planning to work, Harding said. Depending on their incomes, their portion of the rent would rise. Anyone earning above the federal guideline would have to move. But that’s unlikely, Harding said, considering their life experiences. 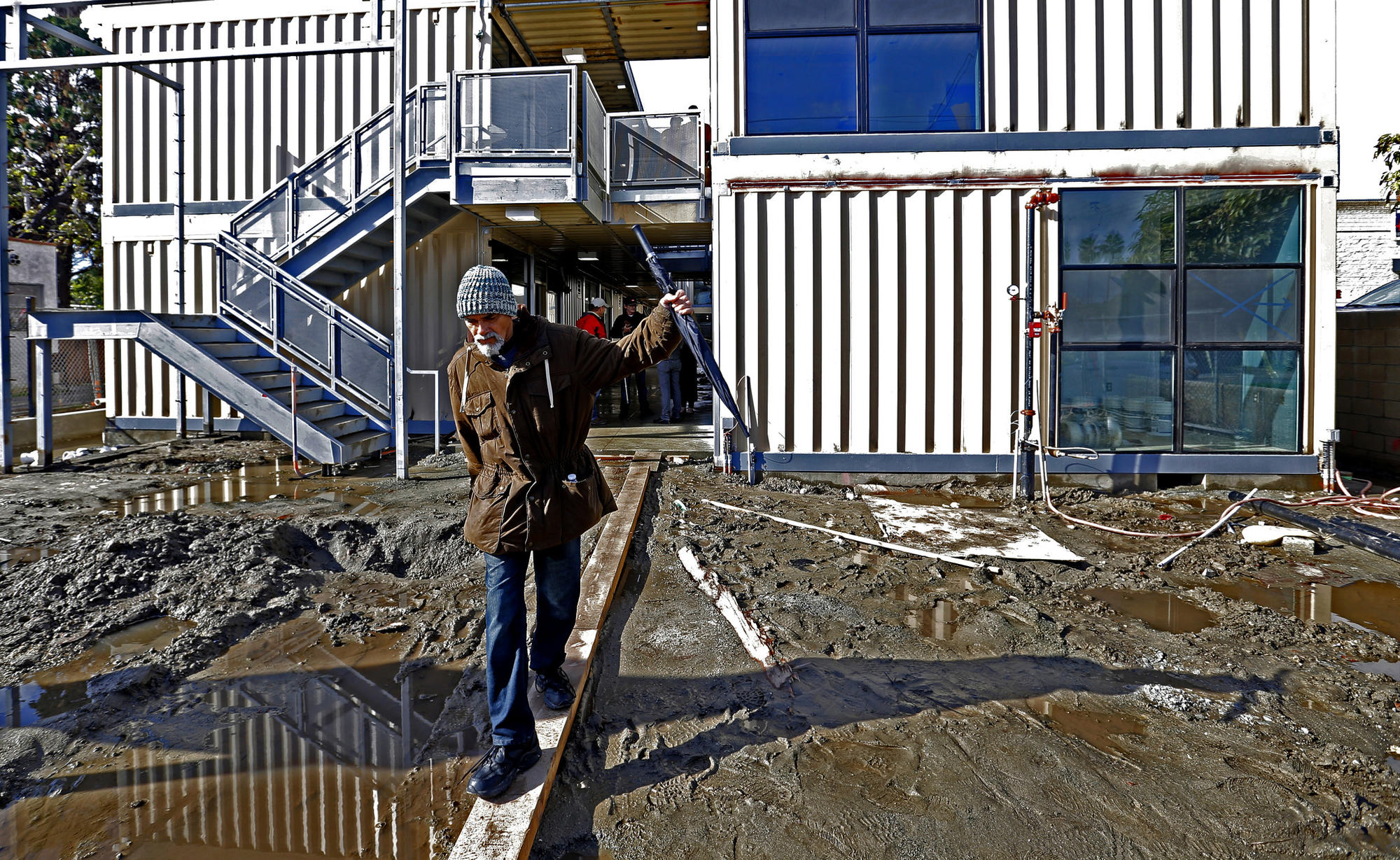 Kurt Carson came to Potter’s Lane from a ledge under the East Katella Avenue bridge over the Santa Ana River. He said he lived there six years and had no complaints, a perspective shaped by his 14 years as a Marine.

“I’ve been places where 2 million people would kill to get a place under that bridge,” Carson said. “We don’t have a whole lot to gripe about in this country.” 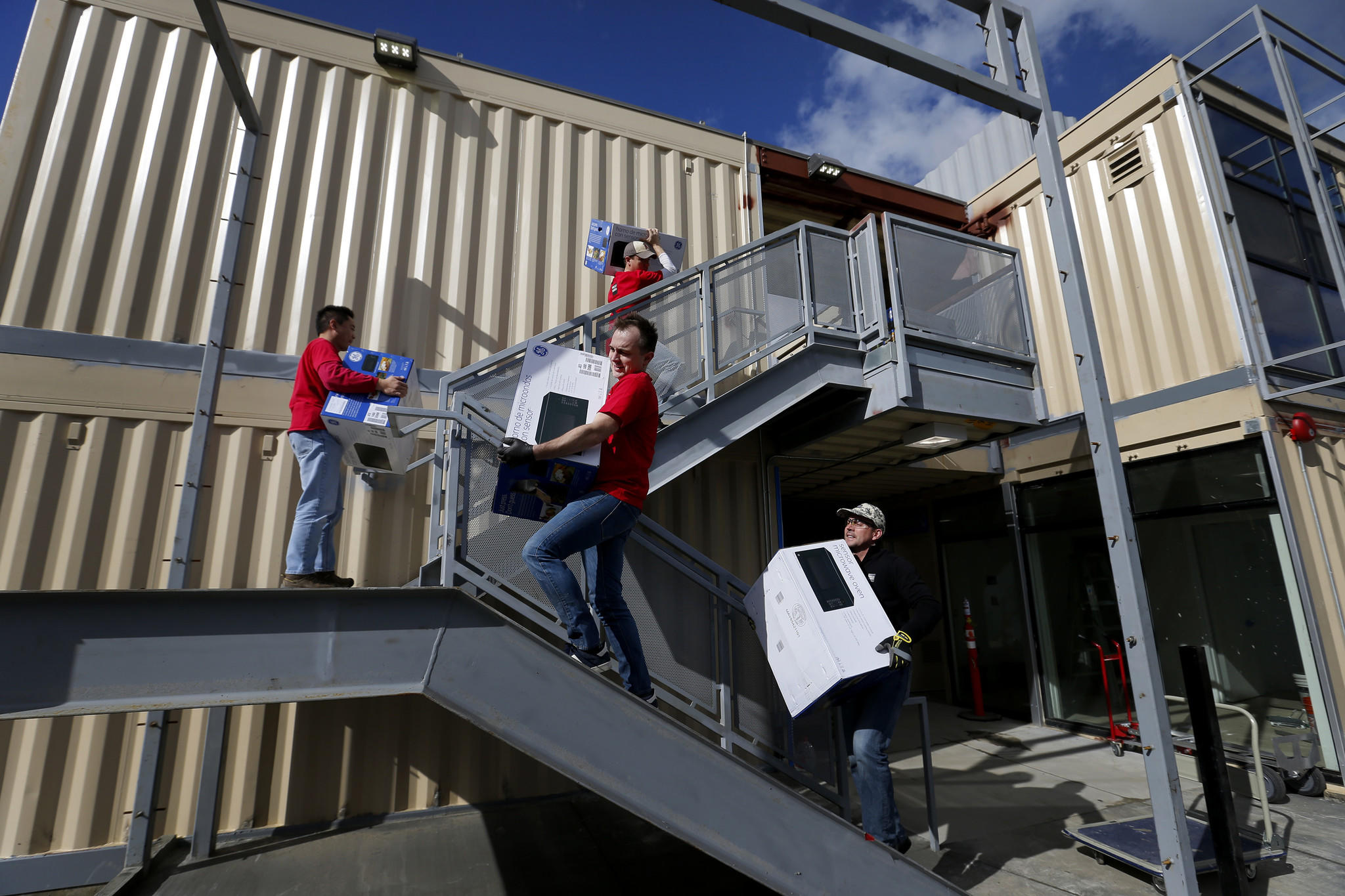 Carson said he’s been talking to an outreach worker for years, someone who, like him, once lived on the streets. Last August, after some of his belongings were stolen, he told the caseworker he was ready to get off the ledge.

“He’s been working on this since August,” Carson said.

On move-in day in mid-March, Salazar and Carson carried in a few bags of personal belongings and settled into 480-square-foot rooms, each with a bed, a dresser, a TV, an easy chair, a dinette, a kitchen and a closet. 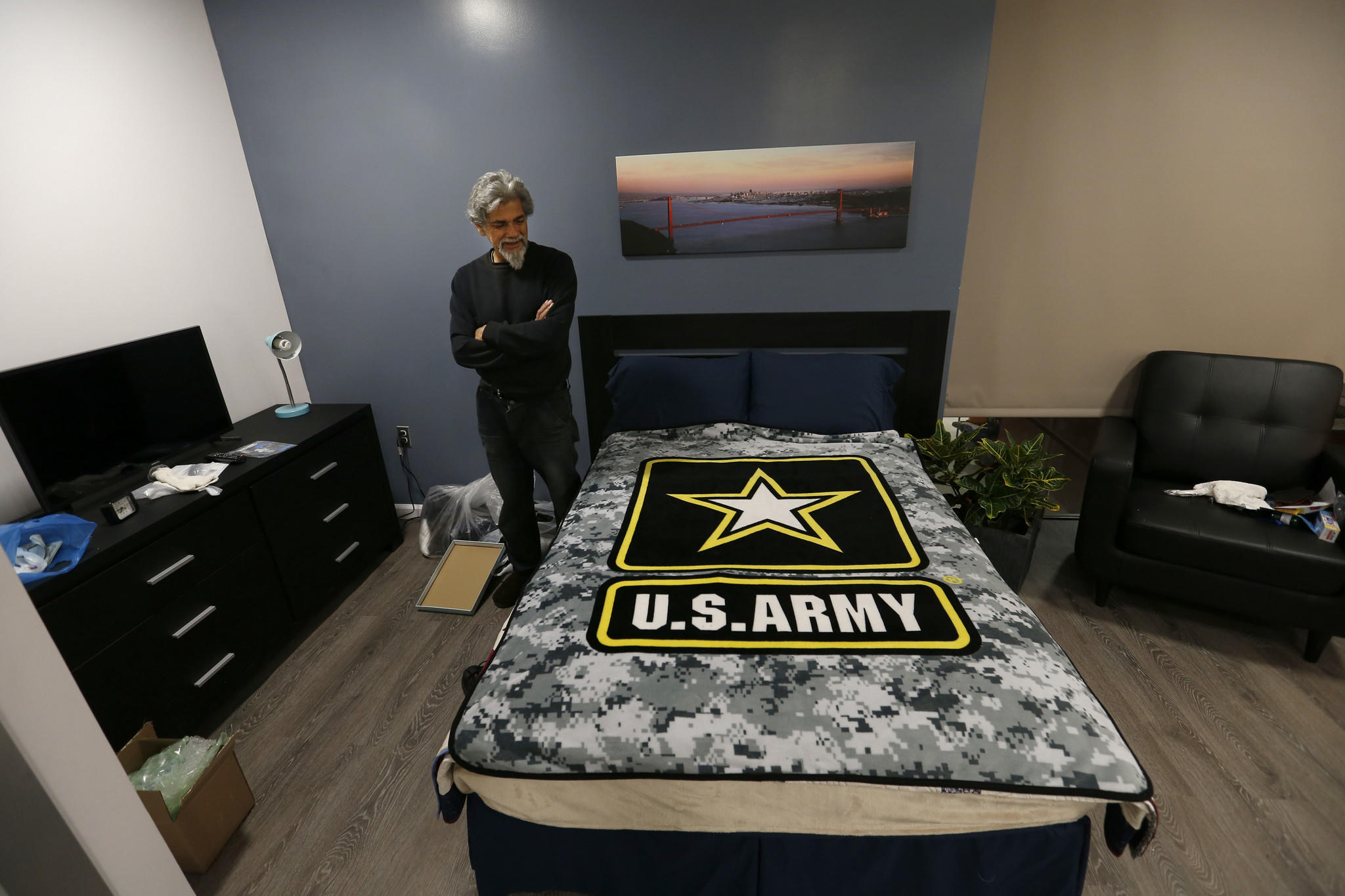 Notwithstanding his stoicism, Carson found a lot to like.

“I’m not going to have to worry about my stuff disappearing,” he said. “I got a door. I can lock it. I don’t have to live with people screaming and yelling.”

He also has plans for the future.

“I think I’m going to go to the VA and get the rest of my teeth extracted and do something about getting some choppers put in,” he said. 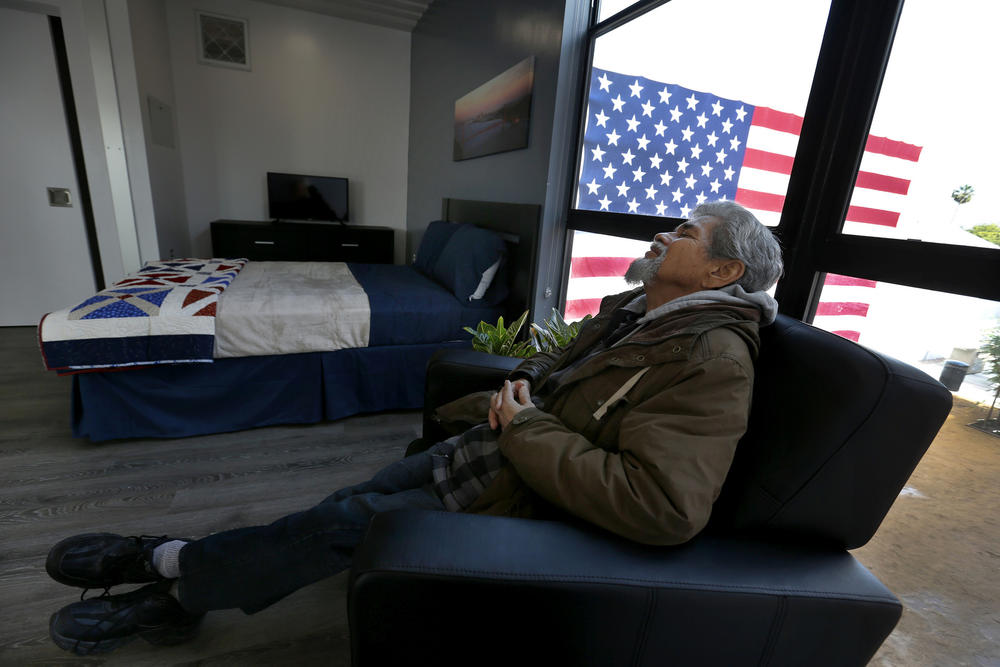